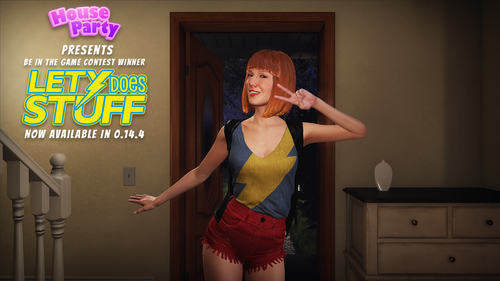 For those of you who haven’t heard, 0.14.4 is centered around LetyDoesStuff, who was the winner of our “Be in the Game” contest along with the Game Grumps. We worked really closely with Lety to tell an awesome, fully-fleshed story that adds a crap-load of new content.

Expect hundreds and hundreds of new dialogues split between 10 characters, several new interactive items, a UI redesign (that looks sharp as shit), and new animations--both in and out of the bedroom.

One other awesome addition to this update is that saves between versions of House Party will no longer be deleted, meaning you can load and continue your previous playthroughs. However, for the most stable experience, and to gain future Steam Achievements, a new save is still recommended.

And to that end... HUZZAH! Steam Achievements are working again! Rejoice, you completionist weirdos!

Seriously, we’re real damn proud of this new House Party chapter. For a full list of changes and additions, check out our changelog below. If you’ve got questions or feedback, you can find us at the usual spots--Discord[discord.gg], Official Forum[forum.eekllc.com], or Steam boards!

Alright, it’s Miller Time. Enjoy this new content drop while we take a breath. Then, party people, it’s right back to working on Leah’s upcoming story!

P.S. For our German and Spanish players, translations for this newest update are coming soon. We’ll post an update when they’re added.