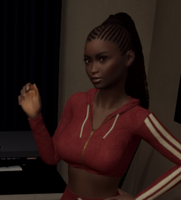 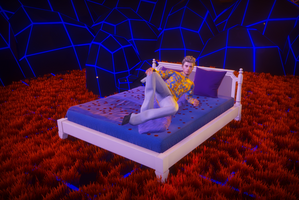 How’s it going? We’ve been blasting out new content for House Party that’ll be headed to Itch.io in the near future. It’s in the hands of our beta testers right now, but we wanted to give you a taste of what’ll be hitting here soon after.

We’ve added more Patrick content--like, a lot of it. In this newest update, you’ll help Patrick become more in-tune with the ladies, all while deciding the fate of his company, Donghauser Industries. We won’t ruin the surprises of his company, but let’s just say Patrick’s definitely been to a sex club with Elon Musk before. This new content includes a female romance route with a fan favorite, but also…

Prepare your brains and your bodies for our first romance route with PATRICK.

On top of the new Patrick content, we’ve added a new female character--Leah! Leah’s a badass who’s had to join forces with Frank, but she’s not totally happy about it. Currently there’s a route that leads to full romance with Leah (different character than above), but we’re just scratching the surface of this character. There’s so much more to come.

Tons of new story, background chatter, features, 3 new romance interactions, and new SONGS thanks to some very talented artists--it’s all coming in this new update. For a full list of changes in just this beta (with more to come before releasing on Steam), check out our blog for more detailed release notes. http://games.eekllc.com/house-party-0-13-2-released-to-beta-testers/