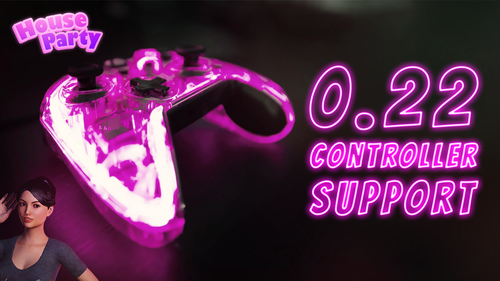 Since adding her is a huge task, and because we want as much feedback as possible, this update will be a little different than what we’ve done in the past. Here is how we’re doing that:

We will be releasing a stable update with controller support, and a separate "testing" update with the female first look. You will find both downloads below. If you download the stable build (House Party 0.22.0 Windows 64 Bit), it will NOT contain the female player first look - it will only have controller support. To try the initial beta testing build that contains the female content, you will need to download the "House Party 0.22.0 Windows 64 Bit (Testing Build - Female Player First Look) file.

So, why treat the female player first look all special-like? In short, she ain’t done yet. But we also wanted to show as many customers as possible our progress (as opposed to waiting and waiting the entire time we worked on her!), and give them ample time to provide us with feedback. While her Original Story content is not done, those with access to the female first look can choose to Start a New Game of the Original Story with her on the Main Menu. In terms of content, we’ve done a thorough first pass through the existing story lines and made a bunch of tone, pronoun, and wording tweaks to make you feel at home in the party as the female player! Unfortunately, we have not had the time to get voiced lines for much of this alternate content or fully convert all intimacy sequences, but bear with us! We’re working on it, and will continue to do so up until (and if needed, after) we exit Early Access!

Controller support is also fully functional, and we added some general House Party polish and UI improvements to this update. You can play the game without any major hang-ups on all supported controllers and the Steam Deck. We still plan on adding some quality of life features and fixes in the future to fine-tune how everything feels, but, as it is now, it’s completely playable.

If you’re curious about the polish we added, some notable changes are that we adjusted the colors for most of the interactable UI elements so they’re easier to see and fixed some cutscene issues that could cause them to get stuck. We also added a garage cutscene and a Frank mini oral scene in the yard.

Leading up to our release from Early Access later this year, we’ll be adding some quality of life features to controller support, polishing and bug fixing the hell out of the base game, and adding a lot more Original Story content, voice acting, and intimacy-specific tweaks and fixes for the female player.

Thanks for being the coolest partiers ever and staying patient as we worked through the hurdle of uncensoring Lety’s content in our last update. We’re sorry for the delay, and we hope you have fun playing as a female! We’re excited to add more of her story as we get closer to House Party’s exit from Early Access!

Note: Updates labeled as “Testing”, “Beta”, and/or “First Look” contain unfinished and untested content. Placeholders may be present for dialogue and various assets. Older save files may no longer be compatible. Custom stories may no longer function as intended. Translations may also be incomplete. Controller support is nearly finished, but if you do run into issues, you may need to temporarily use your keyboard/mouse to restore normal functionality.

Lol, it's here, but you're not going to get it, be patient, you're a second class customer.

You guys are really turning to dicks.

We're really sorry for the disappointment, but our Itch.io players are absolutely in no way second class customers to us! Please allow us to explain:

As mentioned in the post above, the reason we are unable to put the female player first look on various DLSites is because these platforms are not built for hosting testing builds like Steam is. Steam supports convenient game branch and version switching for both developers and players.

To put it frankly, the female first look in its current state is nowhere near finalized enough to be shared as a live stable release with all players like Itch.io and other DLSites are built for. It has known bugs, broken cutscenes, it's missing content, and so on. It's very early on in development, and it would be wrong of us to replace Itch.io's normal version of the game with a version that is intended only for very early testing.

If the Itch.io platform and other DLSites were built for version switching, we would put the female first look on them in a heartbeat. However, these websites are not built for that, so we're really sorry, but all Itch.io players WILL still get the female update when it is eventually in a better, more complete state for stable release.

We're very sorry for the disappointment this caused, and we understand that you might think we're jerks for this, but you are absolutely not and never will be second rate to us, and we really appreciate your patience and understanding about the platform restrictions of Itch.io.

It is completely possible to have different versions of a game in the download section of Itch, others are doing it : some adult VN have both free and extended paying versions available, so if you wanted you could just put the two versions with a warning for the FPC version. Somethig like

We really appreciate you reaching out to us and sharing this information! Actually, we weren't aware that this was something we could do and that other developers were doing it.

Thanks to your comment, our team has been dedicating time to look into this option and has confirmed that it is possible for us to do!

So, we've been working on getting builds of House Party prepared and uploaded, and we're happy to announce that the female character first look is now available for testing on Itch.io!

Once again, we're sorry for ever making you feel second rate. We care so much about our players and that wasn't ever our intention; we honestly didn't know it was possible or common practice to host testing builds on Itch.io alongside stable builds.

Thanks so much for bringing it to our attention, though, and we hope you enjoy playing!

Thanks guys for listening to us.