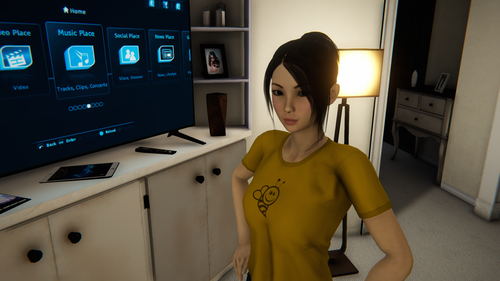 So here's the deal with 0.8.1.  We ran into a lot of technical issues this build.  We are doing a lot of work with the lighting, and we ran into a snag that ended up taking up a good chunk of time, which is also why the build got delayed.  On the positive side of this, the lights in this build look really stunning.  On the negative side, we weren't able to finish Amy's story.

We did add another scavenger list item to Amy's quest, but we are writing a split ending, and we didn't want to half-ass it.  We are going to call it for this sprint and start working on the beta in which we will clean everything up and polish it, and then we will start a new Alpha sprint to finish up with Amy's story, much like we did with Vicky.

That being said, you may not have discovered all of the content Amy has to offer.  Did you know there are two different ways to complete two different scavenger hunt items?

Date Night With Brittney gets a major overhaul this release as well, and we have reworked a lot of the dialogues so that when the voice actors get ahold of the lines, they feel like the Original Story characters.  We also fixed up a bunch of issues with the DNWB story, and you shouldn't run into anymore dead ends.

Next release will be a Beta release, and is scheduled for 12/14/17.  It will include bug fixes, polish, new animations, new models, and voice acting.