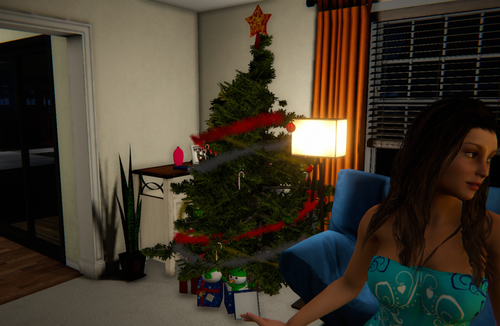 I just wanted to touch base with you guys and let you know what we're working toward in the next Alpha that is due to release on 11/30/17.

With the holidays on the way, we wanted to add a little something to the game.  It isn't much, but we still have a lot to do on the core game to spend too much time dabbling in extras like this.  We're thinking maybe next year we'll write a holiday quest that will be open only for the holidays, and cut off the rest of the time.  For now though, you can enjoy the living room looking a little more festive than usual for the next few weeks.

As many of you know, we've been giving some attention to the graphics and lighting lately, and we've gotten great results so far.  We are experimenting with more elements like having the surrounding light affect the characters and objects more.  We can't go full-blown real-time shadows until we do a lot more optimization, and all of the characters are converted over, upgraded, and optimized, but we are getting closer and closer to really polishing up the look of the game, and this release will be no exception.

We're hoping to completely finish Amy's story by the Alpha release date.  Amy's story is the least linear story in House Party right now, and we are trying to gear the rest of her story and future stories more in this fashion.  As it stands, (and some of you may already know this from playing 0.8.0), there are several ways to complete several of the steps of her main quest.  We also plan on having her story split in two directions from the point where 0.8.0 left off which will result in two different endings as well.

We are backing up and changing our approach to this story.  At first, we were envisioning a type of "American Horror Story" feel, where Brittney and Patrick are in the game, but they are not the same characters from the Original Story.  After seeing it in action, we are changing this approach, and we are re-writing most of the dialogues and a bit of the story so that the story more-so reflect Patrick and Brittney's Original Story personas.

Aside from that, we are fixing up some of the bugs that have popped up from the new features of the game that were added for Brittney's solo story.

We're hoping to have all of this in place for 0.8.1.  We may not have everything quite fleshed out by then, but we will be aiming for a checkered flag on this story and all of its endings by Beta release which is slated for 12/7.

i bought this game a while back and with the new update it says i need tobye it again, even though im using the same account. is there anyway to fix this?

Are you sure didn't have the free version? There used to be an old version for free here. Otherwise message me at jon@eekllc.com.